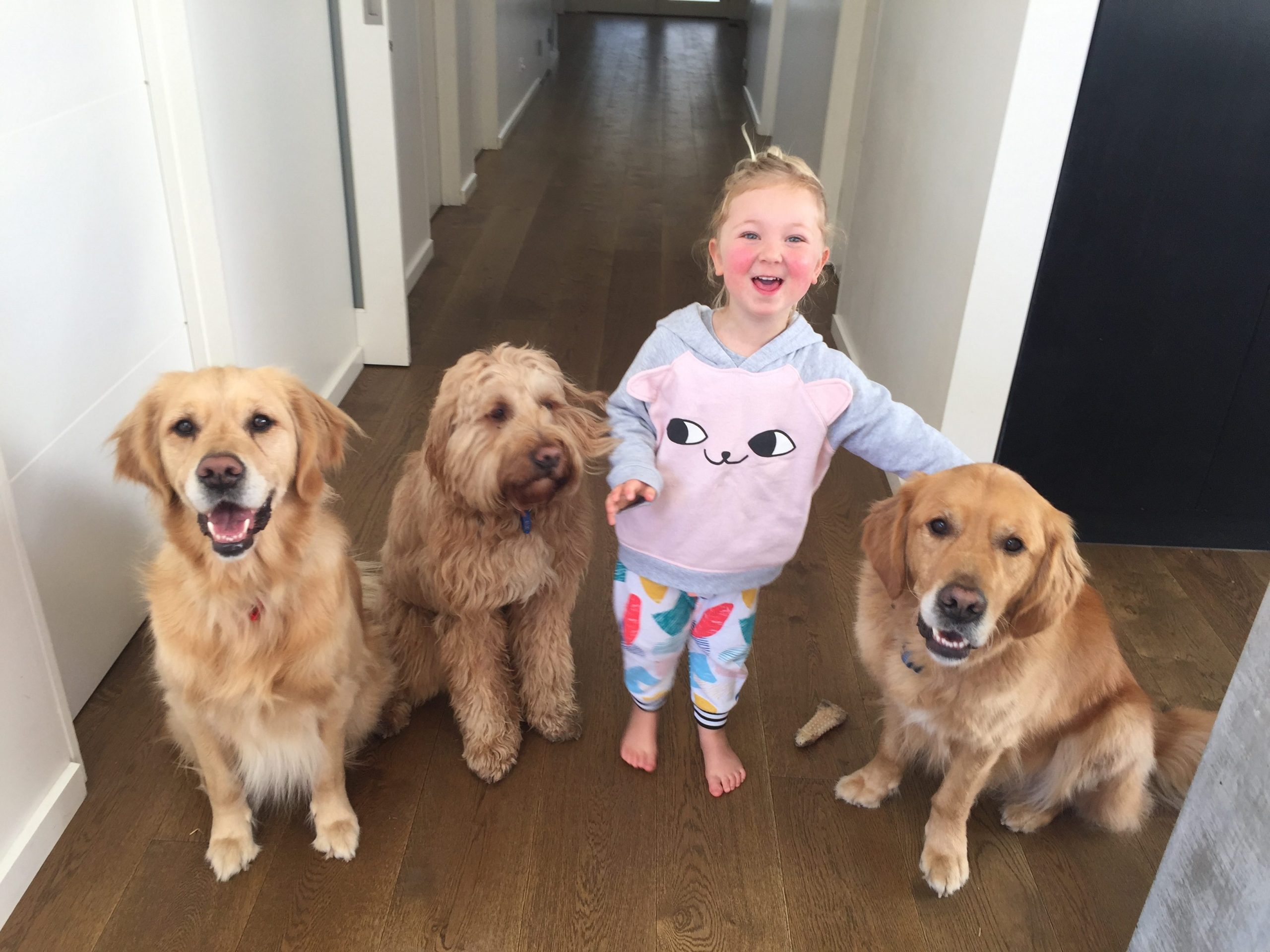 I love nothing more than seeing the pure joy in my kids eyes when they play with their own dog or when they see other dogs. It breaks my heart to know that some children are fearful of dogs. So today, I want to help you overcome your child’s fear of dogs. Occasionally, when I’m out walking Cooper, I see children and sometimes adults too, move away from him, as though they are afraid of him. He is a big, friendly and very handsome dog who loves everyone. I struggle to comprehend that people can be scared of him. I know that I shouldn’t be one to judge as I’m scared of ducks (I was attacked by one when I was younger – but that’s a story for another time). In today’s post, I will give you some advice and tips on ways to help your child overcome their fear of dogs. Just to be clear, I am not a psychologist (I did however major in Psychology at University), but I will be using some great tactics that were provided to us by a child psychologist who we recently visited to help overcome some fears that Harper was really struggling with (also a story for another time). With the help of Mr Cooper, these tactics were used to help a friend’s little boy Mason, to overcome his big fear of dogs…

A friend of mine, Kate, has a gorgeous 3-year-old boy, Mason (also known as Mase), who has grown up with Harper. He was petrified of dogs. Kate’s words “On a scale of 1-10, he was a 15. Wouldn’t go anywhere near a dog or to a place that had a dog”. I think his fear stemmed from the fact that his mum doesn’t like dogs plus he had a little yappy dog get in his face at a young age. Knowing that November was “Bring your Pet to Crèche” month, Kate decided it was time to try and conquer Mase’s fear (and maybe hers too, I was hoping). Jase and I invited them over to our house for a lunch and put a step by step plan together of what we were going to do to help him.

This is how it went… 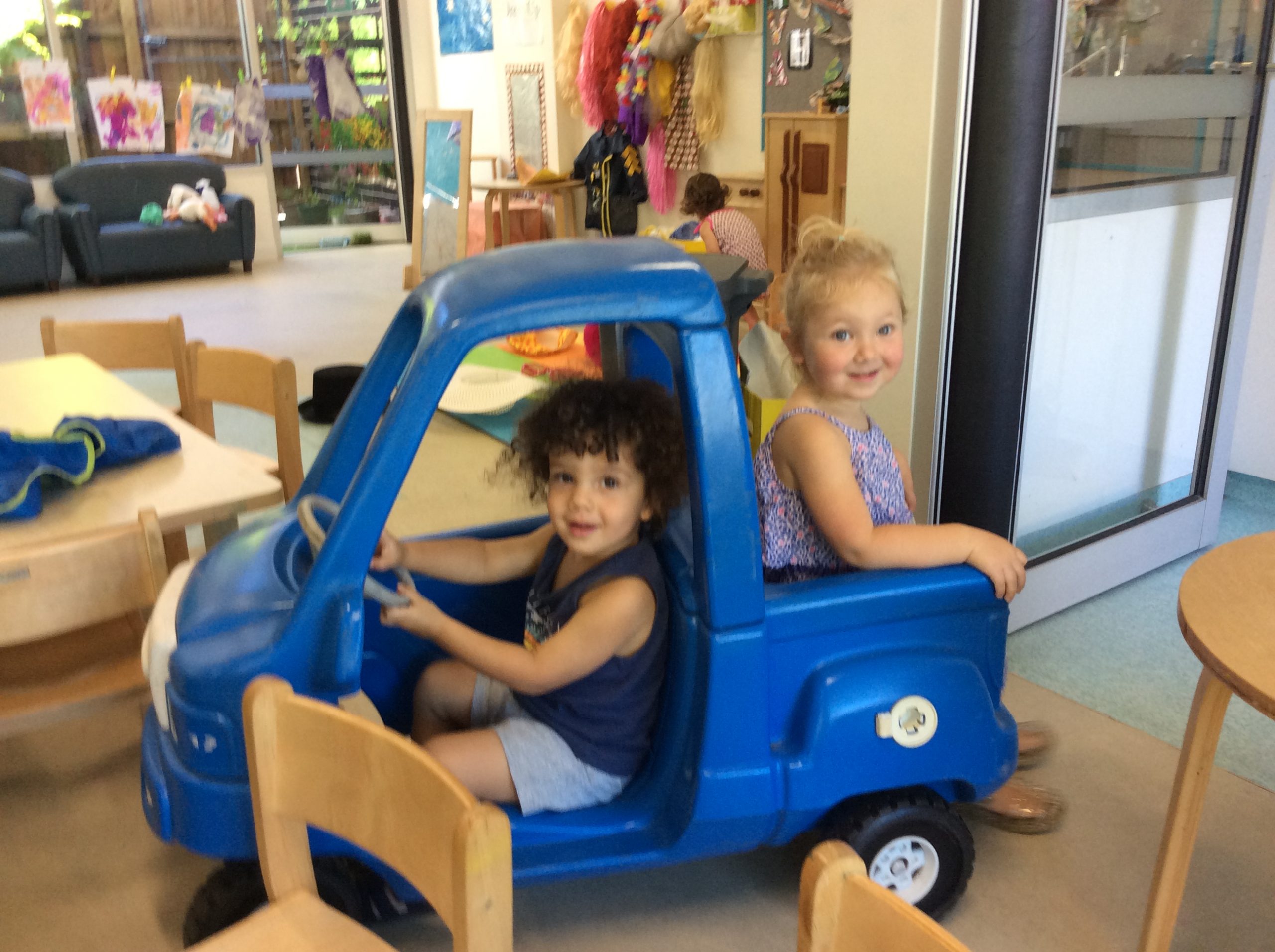 A few days prior to having them over for lunch, I told Kate to start talking about it with Mase, let him know they were coming over to our house and Cooper would be there. Start showing Mase photos on her phone of Cooper (there are plenty of them on my Instagram @cooperandkids). When fear is so bad, even looking at a photo can be terrifying. We’ve been through it with Harper so I know how bad it can be. Using the advice we got from our psychologist, we told Kate that if Mase was too frightened to look at them, she should just put a photo up on her phone and leave it on the coffee table. Mase would most likely, in his own time, go and look at the phone. And he did, and after a couple of days, he loved looking at the photos of Cooper, especially because lots of the photos also had Harper and Paxton in them too. It made him see that Cooper was friendly and the kids love him.

Knowing that Mase was scared of dogs, overnight I defrosted a bone for Cooper as I needed to have some management in place for Cooper when Mase arrived. When we have people arrive to our house, Cooper is often quite excitable at first and this is not what I wanted for Mason’s arrival, so the bone would help with this. Just before they arrived at our house, I put Cooper outside with his big juicy bone and I locked the doggy door so he couldn’t come in. I wanted Mase to come in and see Cooper outside through the window and see how calm and harmless he was. Surprisingly, Mase was super curious, asking his Dad lots of questions about the big doggy outside. I think it really helped that he could see Cooper, but he knew that Cooper couldn’t get inside. Although at this point, Mase seemed quite relaxed, we still did everything in baby steps.

After we had finished our lunch, we decided it was time to bring Cooper inside – ON THE LEAD. I wanted to have full control over Cooper, as the last thing we needed was for him to get over excited and scare Mase even more. I was prepared with lots of treats as well, so I could reward Cooper for being calm around Mase. We talked Mase through every step of the way, we didn’t want to throw any surprises at him. We kept Cooper at a distance and on the lead the whole time. It also helped that Cooper was more interested in cleaning the mess on the floor that the kids had made from lunch, than approaching Mase.

Mase’s parents both gave Cooper a pat. Talked about how soft his ears were. Harper then showed Mase some of Cooper’s tricks. She made Cooper ‘sit’ and ‘shake’. By this stage Mase was curious, standing about a meter away from Cooper. We could see that every time Cooper would get a little closer to him, he would stiffen and hide behind his dad. We made sure Coop kept to that one meter distance. Next, Harper and Paxton gave Cooper a treat and so did Mase’s Dad. We asked Mase if he wanted to give him a treat too but I think that was asking a little too much. When they left our house, Mase said good bye to all of us, including Cooper. He did awesome.

Bringing Mase into our house, with a calm dog, initially locked outside, and then on lead the whole time inside, was a really great way to help Mase with his fear. He got to see how much Harper and Paxton love their dog and how interacting with a dog can actually be fun.

Three days later, was the big test. It was the day we were bringing Cooper into the kids’ child care for “Bring your pet to Crèche” Month. Again, we made sure we had Cooper on the lead. When Mase arrived, we were already there, so Mase’s Dad, brought him over to say hello to Cooper. He still didn’t want to pat him or give him a treat. But he didn’t cry and want to flee the scene. Mase’s teachers were shocked at the progress he had made. After we left crèche, another parent brought in their small white fluffy dog. Kate sent me a photo of Mase patting the little white fluffy dog!!! Biggest achievement! We all couldn’t have been prouder! 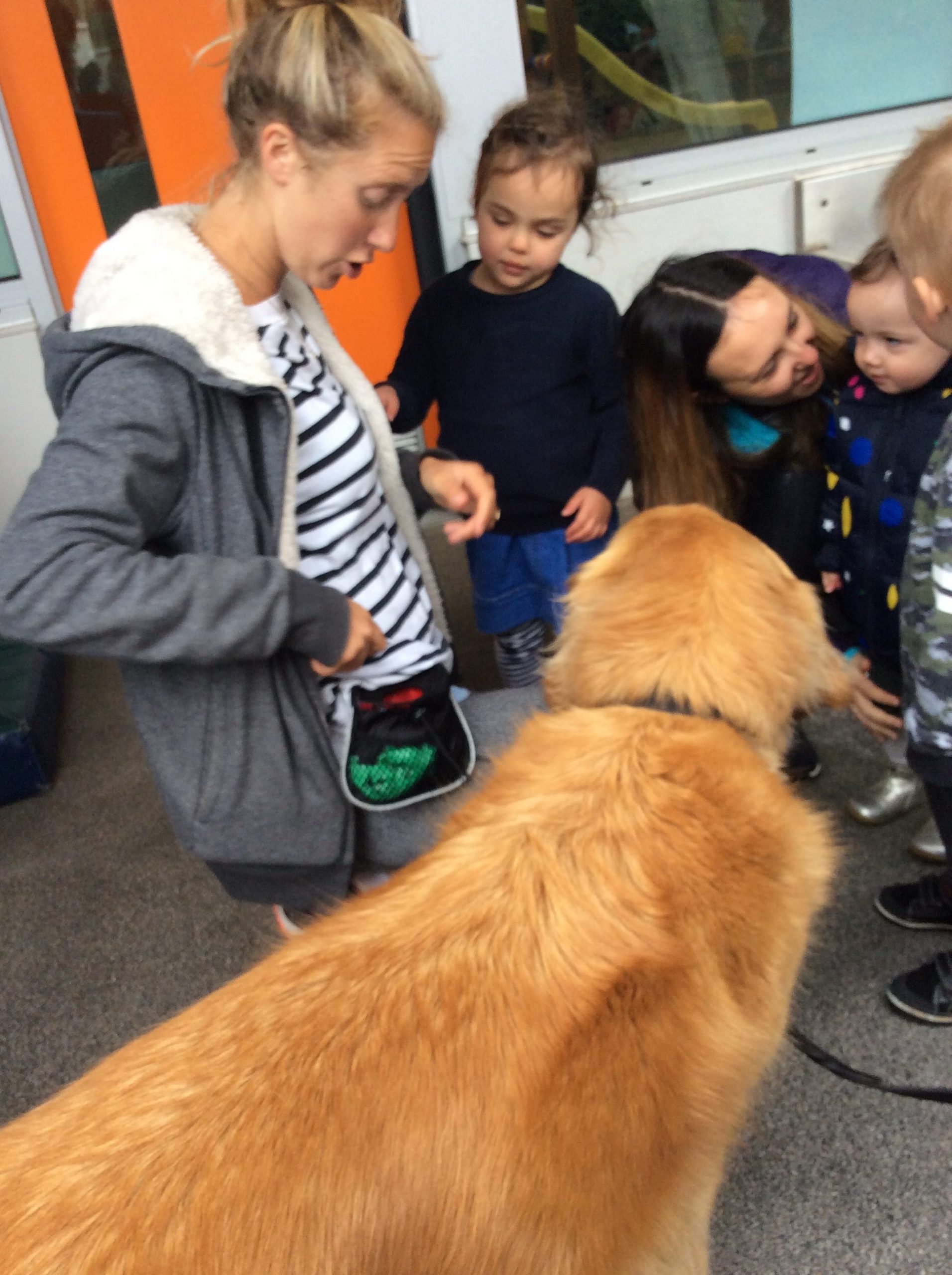 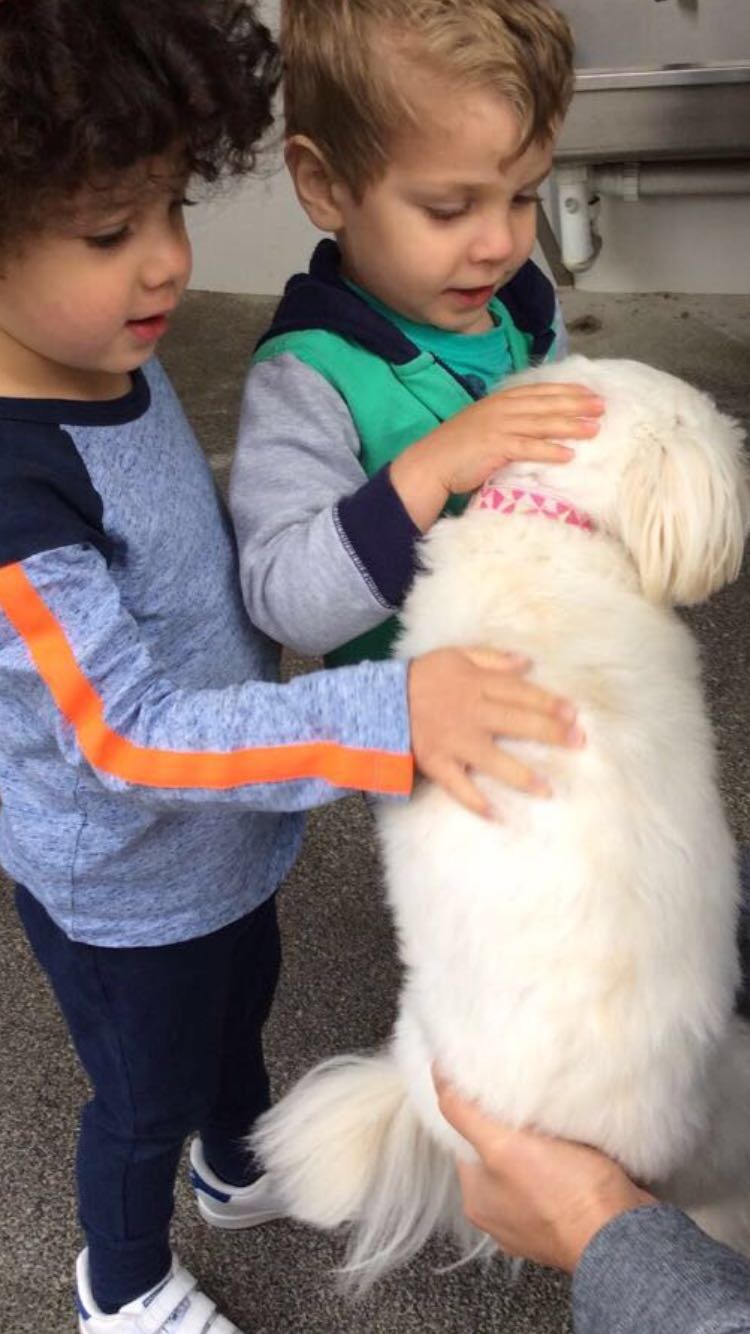 My advice to you if your child is scared of dogs and you would also like to help your child overcome their fear of dogs:

Try something similar. Approach someone you know who has a calm and friendly dog. If you are also scared of dogs, try your very hardest to hide this so it doesn’t rub off onto your child – trust me, I know it’s hard, but I do it all the time with the ducks. Baby steps are good. Something the psychologist taught us about dealing with fears and ensuring they don’t get worse, is to start talking to your child more about your feelings and emotions. Let them know that it’s ok to be scared of things and that you get scared too. But then you need to explain to them what we do when we are scared. We don’t cry and kick and scream and then flee the scene (which is what many kids do when they are scared), rather, we face our fears head on. We talk about them, we explain them. We slowly do things to help make us feel less scared (like the steps above). We close our eyes, we take deep breaths, etc, etc. When Harper was suffering badly from her fears, she would cry, hyperventilate, work herself up so much that we would just pick her up and flee the scene. This response to her behaviour, was actually reinforcing her fears and making them worse. After seeing the psychologist, we stopped fleeing the scene every time she was scared and cried, and it didn’t take long for Harper to realise that behaving like that, would not allow her to escape her fears. It was a slow and hard process initially, but we got there in the end. We just needed to make sure that everyone was on the same page.

Just remember, these things take time, fears don’t disappear overnight, start lightly, work at it. Be patient and be persistent!

If you think your child’s fear is extreme, my advice, is to please seek professional help before things get too bad.

Good luck. And as always, it would be my absolute pleasure to help you if this is something you are currently going through. Just leave a comment below or send me an email.

This article was first published on Mamamia.