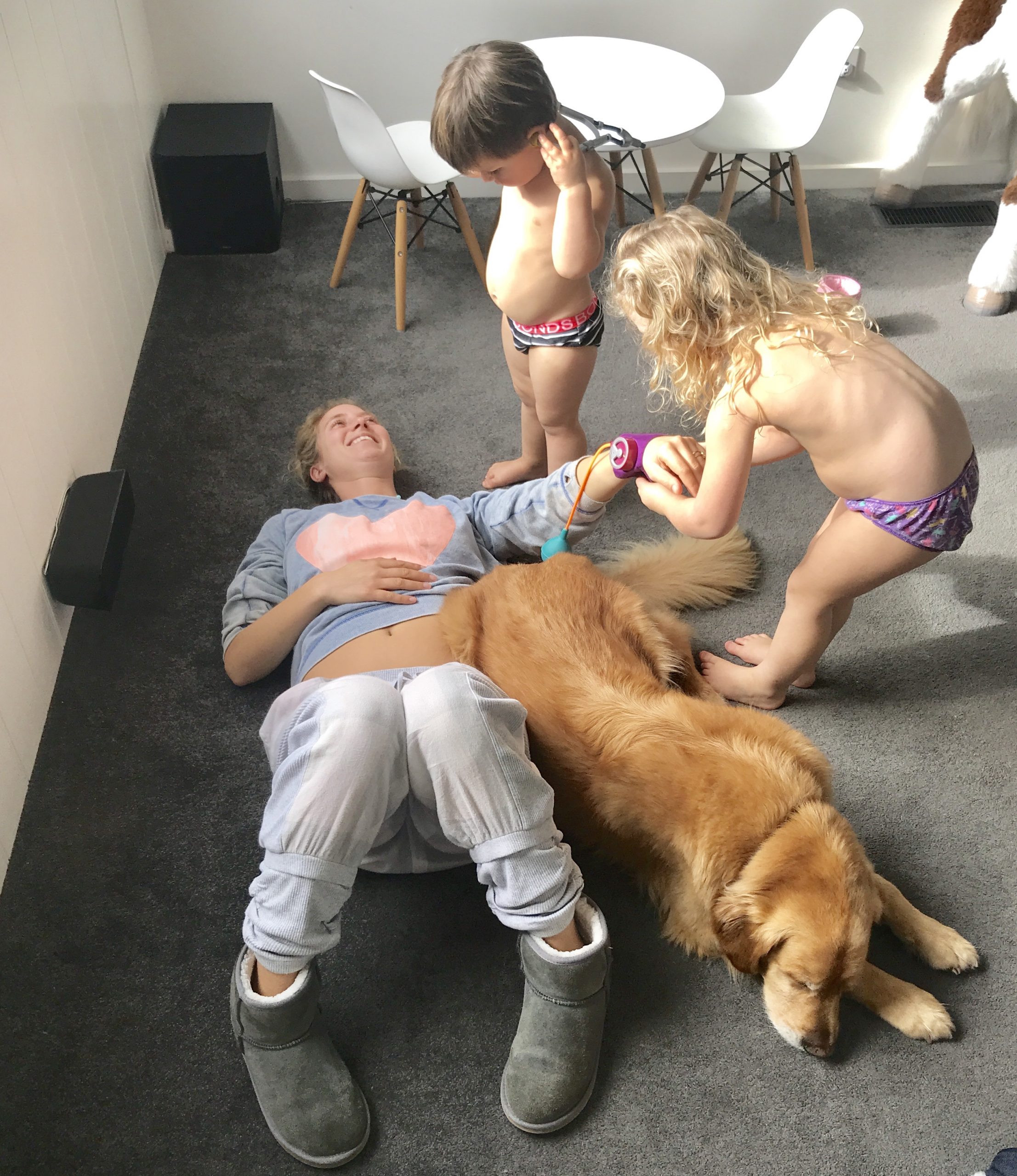 I always knew I wanted three kids. But knowing that pregnancy for me, comes with a good four months of morning sickness it was more about building up to survive that than it was about being ready for a third child. I knew it wasn’t going to be easy and it would never feel like “the right time” and as I write this, I am 13 weeks pregnant, suffering big time! Harper is 3.5 and Paxton is 2. But here we are! In today’s post I want to help you guys with some wisdom I have gained from the past couple of months on how to survive morning sickness when you have young kids.

Those early stages of pregnancy are hard when you’re feeling like shit and trying to hide it from the world and from your kids. I found out I was pregnant at four weeks and started feeling ridiculously nauseas from six weeks. Literally everything makes me gag; brushing my teeth, spraying my deodorant, Jase’s body wash, feeding the dog, getting out of bed, wiping the kids’ bums, making them food, the list goes on and on and on. Plus, trying to hide the vomiting from them! In saying all of this, I know the pain is totally worth it. Well it will be totally worth it. I am absolutely blessed to have fallen pregnant a third time and so far, been able to carry two healthy babies to term. I just need to get through the next few weeks I’d say. My morning sickness lasted until about 17/18 weeks with both Harper and Paxton so here’s hoping it stops then again or even sooner!

I’m not going to lie, I have always been super envious of people who just glide through pregnancy un-phased. I am one of those women who my whole life, all I ever wanted was to be pregnant, have children and a family of my own. I’ve always looked at pregnant women and thought how stunning they look! Hence, why I am so envious. I wish pregnancy looked and felt that good on me. But it doesn’t.

Ok enough of the whinging… Let’s get to business.

Morning sickness is the pits. There’s not much you can do for it. But here are my tips for how to survive morning sickness when you have young kids… Hopefully they help you too.

Use what you can to change your mind-set. Music helped me with this.

I found the first few weeks of feeling like shit were really about survival. I’ve been here before, I know it will pass, let’s just get through it. I literally told Jase that I felt like I was swimming and trying to push through each day and trying not to drown. Just knowing that each day gone was one less day I would need to feel sick. So yes, it is very much a head game. Sometimes my mind would just get consumed with how shitty it was so I found MUSIC to be an awesome way to change that. I started listening to music on my dog walks, I started playing fun music in the car with the kids and we’d all sing along. I think I know every word to all the Frozen songs now! It’s no joke, it helped my head forget about how sick I was feeling and have some fun!

Food and Drink. Find whatever helps you and stock up on it! Letting yourself get hungry will make you feel more nauseas.

Eat what you can. My first pregnancy was the hardest because I’d never dealt with morning sickness before. But now, being my third-time round, I have learnt to just go with what you can. Start the day off by putting food in your belly and then small healthy snacks all day long. If you let yourself get hungry, the nausea gets so much worse. Most mornings Jase brings me something in bed before I get up. Even if it is just a glass of pear juice (which also helps with terrible constipation) or a banana. I just need something in my stomach before I get up and shower.

I say healthy snacking above but do your best. I have consumed so many white carbs because some days that’s all I can stomach. Melted cheese on bagels! I’ve also really struggled to get water into me. Making smoothies can help too. In my first few weeks, I would literally just blend an orange, strawberries, ice and water – it is SO delicious, refreshing and a great way to get some fluids in.

I know this sounds random but Fruit Tingles are genius. I saw it on a forum on facebook and it’s really helped me. I keep a packet in my bag and in my jacket pocket. When I’m on the run with the kids and feel like I’m about to vomit or I’m out dog walking, they just give me that boost to keep going. Hydrolyte icy poles really helped me last pregnancy. This time I found it impossible to eat them because it’s been a very cold winter and the kids just wanted them. So yes, find what works for you and just go with it! Have snacks next to the bed, have snacks in your handbag, always be prepared.

Get Help. My husband literally saved my life in these first few months.

Yes, there are days when he wants to kill me and days where my guilt eats me up but survival is key and my husband has been bloody incredible! He gets the kids up and organises them before he leaves for work. Then he is home most nights for bath time. Weekends, he has been my saviour, literally being a single parent. Don’t be ashamed to ask for help if you’re really struggling. Remind your husband, partner, mum, friend, whoever you call on, that it’s a stage and it will pass and let them know how grateful and thankful you are. Although in saying that for some, morning sickness can last the whole pregnancy. Either way, it is not forever. There is a light at the end of the tunnel.

I told a couple of my best friends very early on this time, purely because my parents were away and I was in serious struggle town. It was the best thing I did, as the help and support I received from them were amazing. Bringing me a boost juice in the middle of the day when I couldn’t stomach anything else and couldn’t move was a life saviour! Just do what you can to get through!

I’m not one to be promoting taking medication during pregnancy. I don’t even love taking Panadol unless I’m desperate. I really do try to avoid it at all costs, but this pregnancy I just had to. I literally couldn’t function. One morning the nausea was so bad, I just broke down to Jase, I cried as I literally didn’t know how I was going to get through being a mum and feeling like this. When I was pregnant with Paxton, Harper was only 9 months and she wasn’t even moving yet, so things were much easier and more manageable. This pregnancy, I have caved and have been taking Zofran. ½ a wafer twice a day as prescribed by my OB. Best thing I did. Don’t get me wrong, I’m still incredibly nauseas at times and I gag from everything, but I feel like I can be a mum and get stuff done, plus I am still able to continue my dog walking (at a slightly slower pace) which is great. If you’re feeling like you can’t function, make sure to have a chat to your doctor about your options.

Sleep as much as you can.

I’m not a day sleeper. But in the first few weeks the exhaustion knocked me hard! When the kids sleep, I sleep. It helps and passes time. Plus, it makes me feel better and as a bonus I don’t feel sick when I’m sleeping! Early nights also helped. Seriously, I think being tired makes you feel more nauseas. I slept like shit last night and woke up feeling way more nauseas than usual today. I take a magnesium supplement which helps with sleep too, or at least I think it’s meant to help your muscles relax. A nice warm bath at night can help as well. It just relaxes you and gets you ready for bed. And then combine that with a stunning Tonic heat pillow for when you get out, you’ll be feeling ready for sleep in no time. It’s my favourite combination, especially on these freezing cold nights.

Find what you can to keep your kids busy in the house, while you curl up in the foetal position and just try to get through the day…

TV, TV, TV, Puzzles, Lego, Play-dough, Arts and Crafts, Dress ups, the list goes on. Playing doctors where you lie there and be the patient is brilliant too! Do whatever you can to get through the days. Don’t feel guilty about it either as it is just a phase and it won’t last forever. In saying that, getting out and getting fresh air can help big time too! Because we have the dog, we’re forced to get out for a walk every day and as much as I dread it and gag non-stop while I’m doing it, I always feel way better after. Organising play dates also helped us. Again, it was hard as I had to pretend like I was feeling awesome to the other parents, but it was worth it because it really wears the kids out and gives them something different to do and a change of scenery!

Take deep breaths when you feel like you’re about to lose your shit.

I don’t know about you guys, but I have felt more angry and short tempered than usual in these last few months. I think it’s mainly because I have been feeling so crappy but also maybe because we’ve been home more than usual so the kids have been a bit naughtier. And if you’ve read my previous article called, Parenting… Why we should Stop Yelling and Start Hugging More, you’d know, I am not a parent who loves to yell at her kids. Stepping back and taking some big deep breaths really does help. It gives you a few moments of clarity to try and stop yourself from just yelling at your kids. 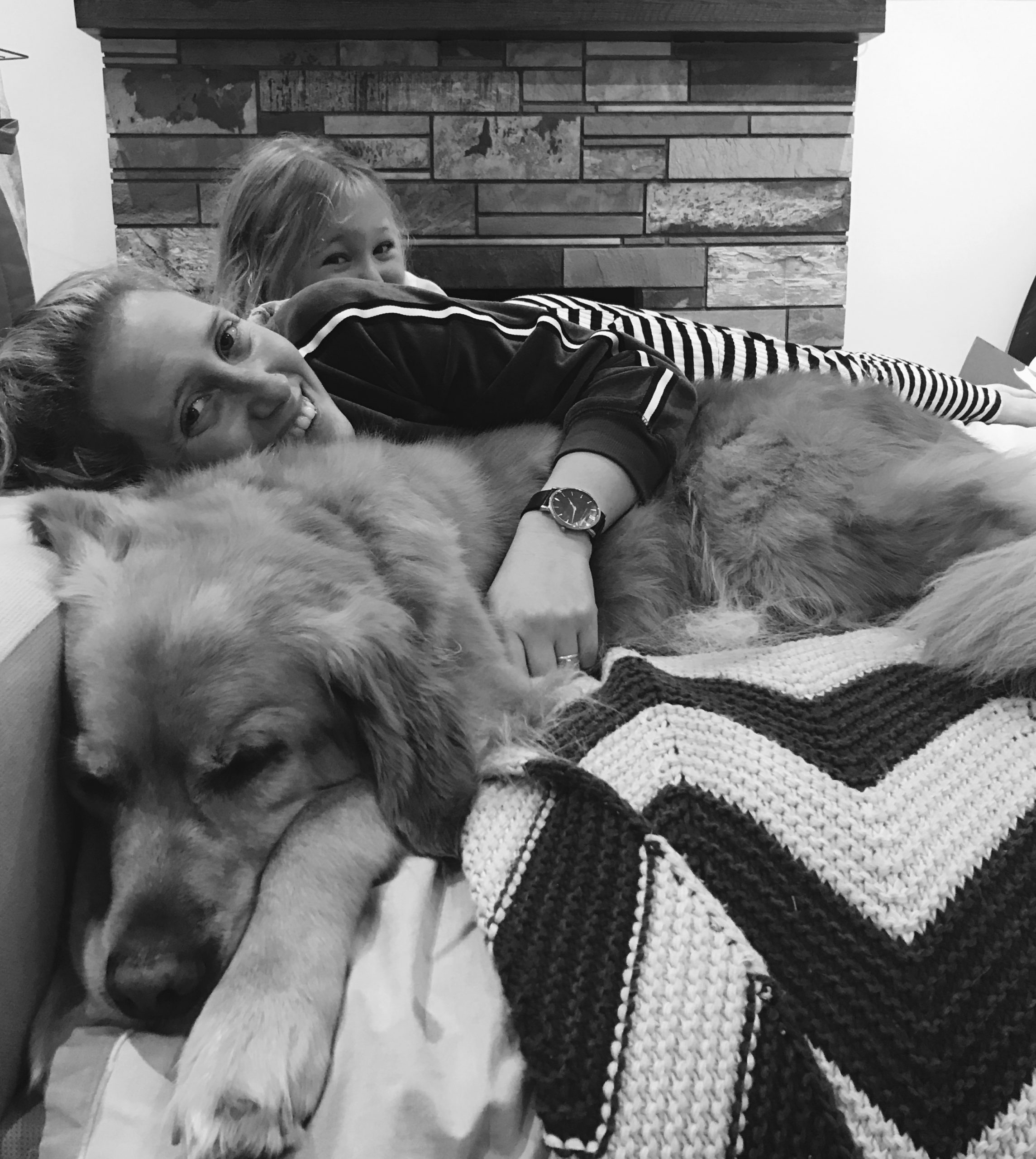 Good luck! Keep going! You will get through it!

As I’ve said throughout this post…. Survival, survival, survival. I hope some of my tips come in handy for you. Just do whatever you can to get through. It won’t last forever. It’s the absolute pits, but you will get there and it will all be worth it at the end. At least I’m trying to convince myself of that right now!

PS. I’m very excited that this article was first published on Mamamia.