Is your Puppy Mouthing Biting and Nipping Chewing Everything? Here’s what to do…

Puppies are little biting and chewing machines. They bite things that move, things that don’t move, each other, your hands, anything. And they have razor sharp teeth. In those first couple of weeks of bring Cooper home, he loved to mouth and nip at Jase and I. Not only is this normal, it is an important part of their development. When puppies play, they learn from their playmates’ yelps and body language when a bite is too hard. Over time, a puppy figures out how to use his mouth more gently (inhibit his bite) to keep play going. 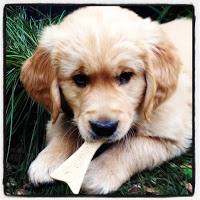 What to Do About Puppy Mouthing and Nipping

It’s important to help your puppy learn to control his mouthy behaviour. There are various ways, some better than others, to teach this lesson. The ultimate goal is to train your puppy to stop mouthing and biting people altogether. However, the first and most important objective is to teach him that people have very sensitive skin, so he must be very gentle when using his mouth.

1. Teach Your Puppy to Be Gentle – Using Bite Inhibition

Bite inhibition refers to a dog’s ability to control the force of his mouthing. A puppy or dog who hasn’t learned bite inhibition with people doesn’t recognize the sensitivity of human skin, and so he bites too hard, even in play. A dog who has learned to use his mouth gently when interacting with people will most likely be less likely to bite hard and break skin if he ever bites someone in a situation apart from play—like when he’s afraid or in pain.

Puppies usually learn bite inhibition during play with other puppies or from their mum. If you watch a group of puppies playing, you’ll see plenty of chasing, pouncing and wrestling. Puppies also bite each other all over. Every now and then, a pup will bite his playmate too hard. The victim of the painful bite yelps and usually stops playing. The offender is often taken aback by the yelp and also stops playing for a moment. However, pretty soon, both playmates are back in the game. Through this kind of interaction, puppies learn to control the intensity of their bites so that no one gets hurt and the play can continue without interruption. If puppies can learn how to be gentle from each other, they can also learn the same lesson from people, so it is up to us to mimic that same yelp a puppy would make.

2. Give your puppy something they are allowed to chew on – Redirect the unwanted behaviours

You need to teach your dog the difference between biting a chew toy and biting human skin. We want them to chew their toys and not us – but they don’t know the difference – so it is our job to teach them.

If your puppy gives you a good nip – that is just too hard, make a loud high pitch squeal to mimic what his brother and sister’s would do if they were playing and he got too rough. However, if your puppy just keeps coming back for more, get up and walk away slowly. To a puppy, any attention is good attention so if your puppy tries to bite you – and you say no or wave your hands around or try to run away, he could see that as attention and think it’s a fun game and chase you and come back for more. So if he doesn’t let up, he is going to lose you.

Another great trick that Jase and I have been doing with Cooper is letting off that yelp to let him know it was too hard and then reaching for a toy he is actually allowed to bite on and giving that to him – to show he can bite on this but not on me. This is not rewarding his behaviour – as it was the yelp that directly followed the nip – it is rather redirecting him and showing him what he is allowed to chew on.

3. Positively Reinforce the behaviours you want to see more often

I am a very big believer in puppy’s responding and learning best from praise and positive reinforcement rather than punishment. I am a positive rewards-based trainer after all! When you see your puppy chewing on something he is supposed to be chewing on, tell him he is a good boy! When you redirect him and it works, praise him! The more you praise him for those good behaviours, the more he will do them.

4. Puppy Proof your Home and put away those things you don’t want them to chew on

What is certain is that chewing is normal and healthy, not a behavior problem. But it can still be a regular problem—for you and your furniture. Whether you have a puppy or a newly adopted grown dog, give him plenty of allowed things to chew right away to get him hooked on those instead of your shoes.

Our puppies will also try to chew on our belongings if we leave them lying around. This is not your puppies fault – they are just exploring. By puppy proofing our homes, we want to minimise the items they are not allowed to chew on and provide them with appropriate things they can chew. Dogs explore the world with their mouths. They want to feel and touch and taste it all! Set your puppy up for success and clean up your house. What you leave lying around is fair game. Remove small items from the floor, low bench tops. Move small items into cupboards, draws and shelving where you know that the puppy won’t be able to get to and stop leaving your undies, shoes and socks lying around because it will be your fault if your puppy decides to chew them up! Same goes for kids toys if you have children. Try and have an allocated box or room where these will live that your puppy can’t have access to. Where possible, prevent mistakes  and when you just can’t supervise, put your puppy or dog in an enclosed, dog-proofed area with a chew they are allowed to have.

Finally, you need to remember that puppies aren’t nipping and biting intentionally to hurt you. They just want to explore the world the only way they know how, play with you, get your attention and even soothe their sore gums if they are teething. Remember to always reward their good behaviour and ignore or redirect the undesired behaviours. 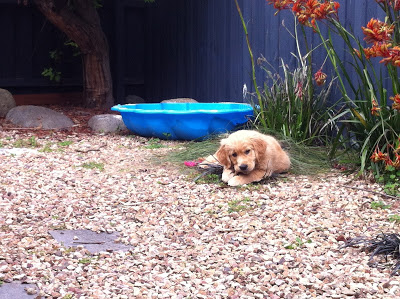